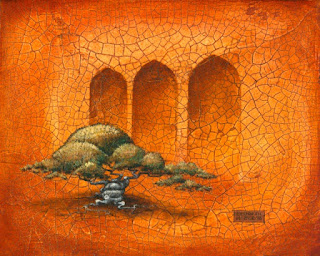 Another painting finished, using the Crackle Paste. I see so much online and on Facebook regarding "Intuitive Painting", and wondered what the heck that was.  The funny thing is, I've been working like that for a very long time.  It occurred to me that my sculpture has been that for decades, and now my painting fits that description, pretty much.  If it's what I think it is.  In my case, I simply get into the "zone" and put on canvas, board or paper impulsive imagery. Usually the first thing that comes to mind is the best one. The moment I stop to wonder about whether that idea is appropriate or what it means, or question the impulse and try to make it "better", it goes sour. Looks lame. And usually, when I wait expectantly, I get a title. Or often it will plop into my head as I am finishing the painting. I've given up wondering what the title means, or if others are going to expect an explanation. Years ago at gallery openings, when patrons asked what inspired me to sculpt what they saw on the pedestals, or what a title means, I finally got to the point I would shrug.  Strangely, most were pretty happy with that. Some nodded mysteriously, like we were both party to an intriguing secret. 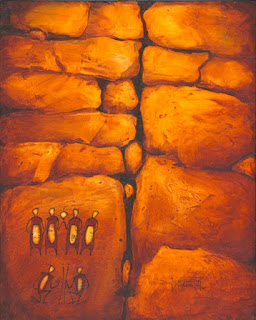 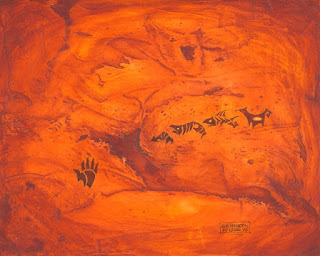 Recently I discovered through a friend, a brilliant artist whom I know only through Facebook, a Golden medium I didn't know about.  It's called Modeling Paste, and comes in a flexible version, for canvas or paper, and a version that's only for hard surfaces.  I like them both. But the hard version is a little more fun, and I've begun painting on hardboard surfaces, anyway.  After the gesso is dry, I trowel on the paste, and let it set for a couple days. It can be carved or sanded, and stains beautifully. I've used FW Acrylic Inks on them, mostly.

On the heels of this wonderful discovery, I woke up with a dream image of sort of Human figure cuneiform images in my mind.  You know that moment when you're just becoming conscious and there's this last "stamp" of image that appears, not connected to a dream at all? I took it as an imprint from the Muse herself, and went with it.  Why not? So the first image above sports the female versions on the top and the male below.  Well, I only woke up seeing the male versions, to be truthful, but when I laid the pen to paper, later, the female came quite readily. The female second from the right appears to be pregnant, and holds a lamp, together with her sister to the left. The males always seem to be dancing, ceremonially, and some hold staffs, with two matching, side by side.

In the second image, the painting has fossil/cave painting figures, that seem to be flowing into the depths of a cave.  I know if I try to interpret these, I'd be wrong, so I'll leave that to the viewer!