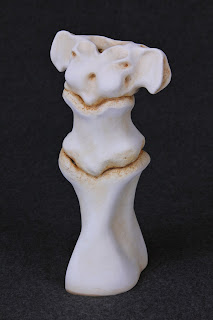 Okay, so it's a cute title, and I've never done a cute title before.   In actuality, my name for this piece was the ho-humdrum "Abstract Torso", but my husband Jim likes to name a lot of my pieces, and does a great job of it (as well as shooting the fabulous photos!).   He really liked "Venus de Vertebra", as the piece is based on bone-like segments.  It stuck.  Out with the boring title, in with the cute title.  She is truly different than anything I've done before, except for the tiny version that was a maquette for this larger one.  Unlike the full-form Venus, the maquette has a head and face.  If I can find a photo, maybe I'll post it eventually.  And as are all of the pieces in the photo postings I've listed on this blog so far, she is camping out at director Kevin's lovely gallery, Art On The Boulevard, in Vancouver, WA.   www.artontheboulevard.org   Venus is 9.5" tall, and lovely to hold and stroke.
Posted by Elsbeth McLeod at 10:47 PM 2 comments: 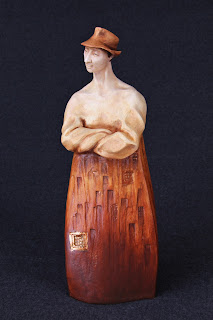 This gentleman is the third and last of the original pieces that include Approach and Faith.   While I was creating him I heard old radio program private eye music and narration in my head.   I envisioned him within the aura of a street light, watching the city scape that seems to encompass his body, or to define his identity.   The metallic copper "windows" on his form pierce the muggy, smoggy dusk with warmth and hope.  Periodically I will sculpt and paint pieces whose forms reflect the world or identity that defines them.  I'd like to do more of those.
Posted by Elsbeth McLeod at 5:39 PM No comments: 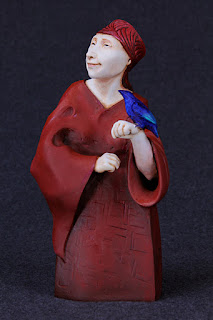 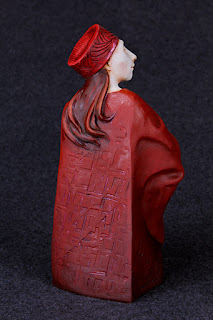 Another one of the original three from a couple years ago, Faith is perhaps an unintended self portrait.  But then, aren't all of artist's works self portraits?  Somehow she even looks like me.   I'll let you fill in the symbolism on this one.  Faith is also my husband's favorite piece.
Posted by Elsbeth McLeod at 10:52 PM No comments: 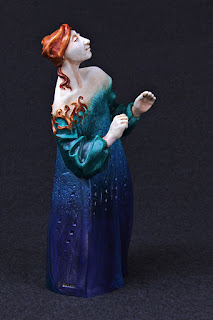 This lady was one of the three sculptures first done of the newer, lower-fired clay I was experimenting with a couple years ago.   The voluminous sleeves indicate the (emotional) baggage we often carry with us when we approach a new situation.   At one time women used their baggy sleeves to carry essentials in, but with Approach, you have to wonder.....how essential are the contents of her baggage?
Posted by Elsbeth McLeod at 8:15 PM 1 comment:

This is the original.   Completely made of ceramic clay, painted with oils.   My deceased husband, Neil, and I decided after having the little guy on the market for a year, that we loved him too much to send him into the hands of strangers.   We made an executive decision to keep him in the artist's collection.  He IS precious!   Unfortunately, Neil didn't live long enough to see Whetherbird's next incarnation in bronze and concrete.   He would've loved the new version, I know.   Neil was the one in 1999 who pushed me to cast in bronze, his intuition told him it would be a great move and a success story.  It was.  This is Neil's photo of Whetherbird: 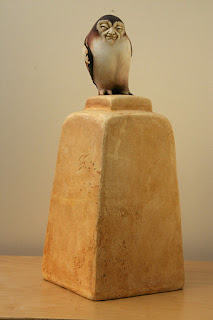 Helping Him Make Up His Mind

This sweet little anthropomorphic owl cast in bronze from the original ceramic sculpture created in 2000 has gone through a few changes since his beginnings.   I'm not sure if I have an old photo on file of the original, but the casting of the bronze has divided the little bird's new medium from that of his pedestal.  The first bird was solid ceramic clay from the top of his head to the bottom of his milestone-based pedestal. It was all one sculpture.  Now, the bird is bronze, the pedestal is concrete....a substance I've recently discovered the magical utility and versatility of! 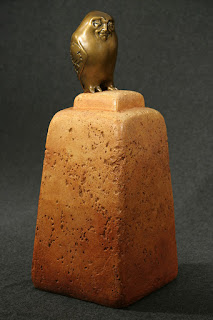 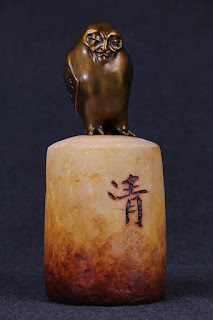 The first photo is of the Whetherbird's first concrete perch, which is also made from a mold of the original clay pedestal.   I packed the silicone rubber mold with white Portland cement colored with an ochre dye, and after it was cured, ragged it with acrylic paints.

The second photo is of the hand-sculpted concrete version.  Much smaller.   The cement was hand-pressed onto (and into) an armature I made of 1/4 inch hardware cloth.  Tricky!!  The weight of the wet cement kept pulling it off of the wire mesh!   It took another day's troweling of a second coat (without the perlite aggregate) and much rasping and sanding to make this little perch for him.   The drilling of holes for his bolts that hold his feet securely was also tricky, but done within 24 hours of the creation of it made it easier.   We really don't want this valuable little critter flying away, now, do we?

The Chinese character I carved on the facade means "Clarity".  The Whetherbird has spent the last 11 years trying to decide "whether" to rain or shine (you'd have to see his wings to understand), so I finally gave him a little nudge with that character.   That version of "Whetherbird" is 10" in height.   The pedestal is hollow.
Posted by Elsbeth McLeod at 1:32 PM No comments:

I Found Her Face

Okay, I did a bit of searching and found Wind In The Tree's face on view.   The Alkyds and Acrylics I've been using on the surface has been a challenge for Jim to photograph, but I'm loving his growing techniques. 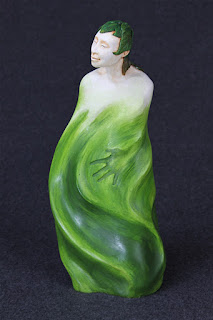 After all these years, I still find the handprint more effective than a sculpted hand.   It's a haunting echo of hand that doesn't interfere with the rhythm of the sculpture's surface.   It has been particularly appropriate on the planed surfaces of faceted pieces, but a little more difficult to place on a curved piece without it seeming to be "stamped on".  But you know me.... I love a challenge!
Posted by Elsbeth McLeod at 9:37 PM 2 comments:

Wind In The Trees 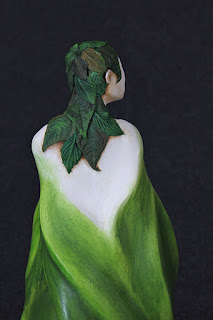 This is the backside of "Wind In The Trees", who is approximately 12" high.   I seem to have misplaced the face-on view of her, but when I do find it, you'll see how serene and sexy she is.   The leaves that spill from her delicate head have a slight iridescence to them, and were created by pressing the ceramic clay into the silicon rubber molds I made for the leaves of my silver and bronze jewelry out of young leaves in our garden.  It took the better part of a day to carefully monitor the dryness of the ceramic clay leaves, delicately nudge them from the molds (sometimes they tear), and place them carefully on her head with slip (a more liquid version of clay) when sculpting the piece.   How could something so small be so intense?

I will post her face-on view when I manage to dig up that photo.   My desktop ate it, I think.
Posted by Elsbeth McLeod at 7:51 PM No comments: 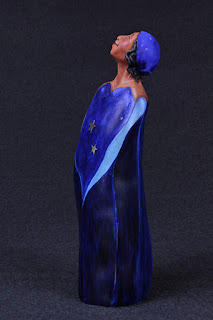 I received a comment from Marian wanting to see more of the latest sculptures of the Art On The Boulevard group, so, Marian being one of my favorite artists, I'd be happy to show some!  I'd planned to do so, but have been out of town for awhile, and blogging being a new and intimidating tool, it takes someone asking to get me motivated to post again.   Thanks for the thumbs up, Marian!  This blue lady with fine silver inset stars is called "StarGazer". She is 13" tall.
Posted by Elsbeth McLeod at 5:41 PM 1 comment: