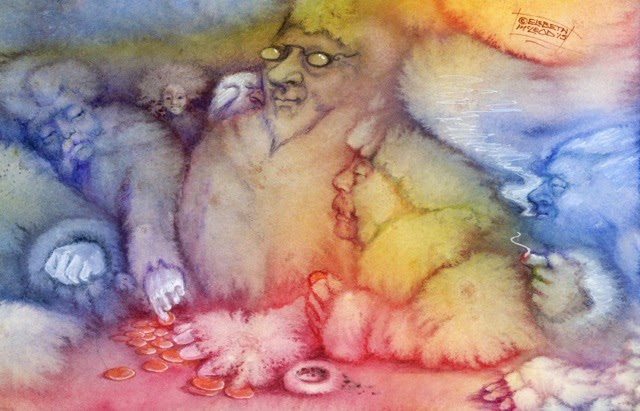 As many of you know, the Pigment Spill experiments I've been working with for weeks have given way to serious study, exploring the various ways of utilizing them.  I started with sketching over them with colored pencil, allowing the blooms to be nothing more than back drop.  That was okay.  Not wonderful.  I played with the textures, bringing faces out of the salt blooms, and that was fun.

Lately I've allowed myself to "see" things emerge from the random colors and patterns, as they often do take on a 3 dimensional appearance.  I have a long history of late night staring at linoleum floor patterns and seeing creatures and scenes in them, while half-dozing on the john.  Don't we all?  Well, strangely I have known some folks who have no idea what I'm talking about with that particular experience.

Now some of these Pigment Spill pages reveal little to me other than cool patterns.  Maybe I will just frame them the way they are.  But others, like the one pictured above, only take a little patience before I can tease out a scene.  Usually, like the above example, I make a start with a face I see (as I did with the little, furry-hatted man profiled in the middle of the sketch), then more appears, then more.  Sometimes I'm stumped halfway through.  Then something clicks in my head, and I "see" the rest.  I've never sketched like this before, it's sort of like a treasure hunt, or piecing together artifacts in an archeological dig.  What I end up with is a scene I would never have imagined, with stories that emerge along with the images.

As of this afternoon, I had been calling this sketch "The Wager". But after Jim studied it for a moment or two, he thought the characters had maybe come to the large man in goggles, looking for fortunes to be told or insight into their lives and work, putting their hard-earned coins down.  The man was a blind Seer.  Perhaps the bird companion on his shoulder speaks to him, I'm not sure.  At any rate, this exercise has had me more spell-bound than I've been with any other art form in years.

I guess the text says it all.  I was anticipating a really pleasant day with my sketching buddy from Seattle yesterday, and couldn't resist sketching while waiting.  It was a really inspiring day, and the weather was perfect!

I'm loving my new sketchbook from ThePerfectSketchbook.com.  The paper is really nice for water media.  It's a little off white, to make it easier to see what you're sketching and painting when you're out urban sketching.  The sun doesn't blind you off the pages when doing street scenes, skewing the accuracy of the colors you're trying to lay down.  I'm pleased that I didn't screw up the proportions (too much) of the people, and the table perspectives aren't too bad.  I still need more work on that, but I'm really happy with the food cases and their respective goodies!  Can you just smell that fresh-roasted coffee?
Posted by Elsbeth McLeod at 8:12 PM No comments: