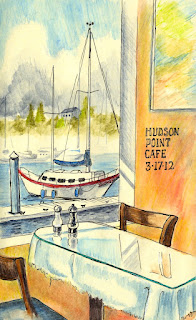 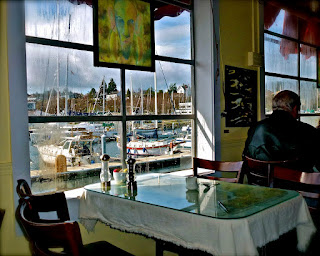 Finally, the Hudson Point Cafe, as promised.   Our favorite hang out in Port Townsend, being devoted to the art on the walls, the staff, and the most fabulous cajun-style catfish plate.  Mmmmmmm.   Even though the last couple times we went there the catfish was sold out, the food and the view are always awesome.   We've visited there again recently, even since the St. Patty's Day Biomass Forum meeting at the Unitarian (see 3-17-12 posting).   I have included Jim's "painterly" (iPhoto) rendering of his photograph of the scene that inspired my sketch, the original of which I had used later in the week for color reference.   The sailboat, particularly, I was in love with, and imagined an afternoon aboard her.  Too bad I'm so terrified of the water, but that hasn't stopped me from sailing on friend's boats in decades past.   Some things are worth defying phobias for.   Some of my best memories are on sailing vessels.... that and a hot air balloon.

(A note:   You can see how my impression and arrangement of a scene isn't necessarily faithful to the circumstance... things get eliminated, re-arranged and color-enhanced!)
Posted by Elsbeth McLeod at 9:40 PM 3 comments: 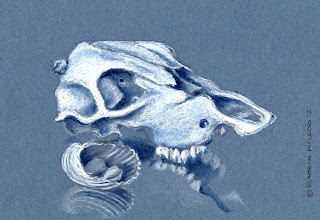 Recently, Jim and I stopped by a Port Townsend framing shop on our way out of town, and there were scraps of matt board for sale, 10 cents each, in a bin.   Halleluia.   Once home, I pulled out an old elk skull from my studio bins, as well as some shells I'd picked up on the beach in Florida years ago, and did a study in pastels.    It took me coming back to it two days in a row, as the sun had to be just right on the glass tabletop.   Matt board makes a great surface for pastels.   Today I also bought a little stool with a pack under it for street corner sketching, as well as a variety of Liquitex acrylic inks to fill my waterbrushes with for on the go.   Watch out world, you're gonna get sketched! 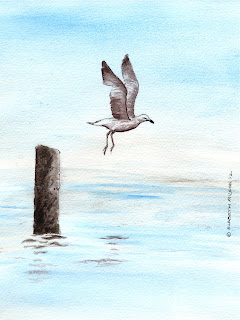 Sometimes you just need a day like this.
Posted by Elsbeth McLeod at 11:16 PM No comments: 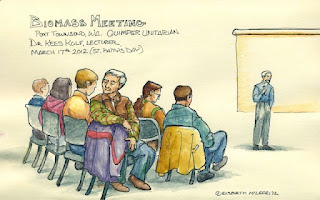 Jim and I celebrated Saint Patty's Day by popping into the Port Townsend Quimper Unitarian Universalist Fellowship hall (whew, that's a mouthful!) to listen to Dr. Kees Kolf speak on biomass and it's hazards to the local population.   We'd heard him speak on this same issue on other occasions, so I listened with one ear while sketching with the other hand...   maybe my brain will work better that way?   Anyway, the Fellowship Hall was crowded, but I didn't have time to draw masses of heads and chairs.    I'm really enjoying later filling in the ink drawings with color.   We left afterward and ended up at our favorite lunch place, the Hudson Point Cafe, where I did another sketch of the neighboring table and the sailboat at the pier outside of the window.   I haven't finished that one, yet.
Posted by Elsbeth McLeod at 5:51 PM 4 comments: 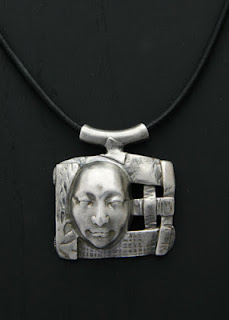 I thought I'd mix things up again and post another silver jewelry photo shot by Jim.   This is one of the first pieces I made that sold at Art On The Boulevard and as it was one of my favorites too, perhaps I will make more that are similar in style.   I love the weight and feel of polished silver in my hands....

"Li" is the name of a face I had carved in plaster a few years ago.   I had made a mold of it and subsequently used that to create a number of versions in combination for jewelry, usually pendants, sometimes in bronze or copper jewelry.   The silver is woven (tricky!) with textured silver strips (the textures were from household objects I'd molded also, like carrot greens or fabric), and the result makes a great foundation to meld a tiny silver mask onto.   This piece is about 1 3/4 inches or about 4.5 cm across.

Posted by Elsbeth McLeod at 7:16 PM No comments: 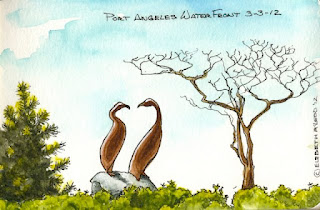 Last month I bought a Moleskine small enough to fit in my purse, with watercolor paper pages.  And earlier this month Jim and I were at the Port Angeles pier on the waterfront, attending an activist rally against a recently permitted biomass project to be built at the Nippon pulp mill.   As seems typical for me, the downtown traffic, the diesel fumes, sent me coughing to hide in the backseat of the car for the duration while Jim took photos of the activities.   Some activist I am!  I took the opportunity to pull out that little Moleskine and sketch in ink the large, cast bronze, cormorant sculptures installed in 1980 by the sculptor Duncan McKiernan.   A week and a half later I put color to it from memory with my little, pocket-sized Winsor-Newton watercolors.   I've read about "Sketch Crawls" on the Urban Sketchers website, but I guess for me a sketch crawl is descriptive of the time it takes me to finish a sketch nowadays.

I left out the nearby rails in this picture, as I like it better without them.
Posted by Elsbeth McLeod at 11:07 PM 1 comment: 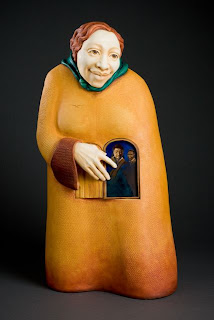 As I was working on this clay Postulant, a very dear Quaker friend was on her deathbed.   Mary had been a teacher for many years in California, but had moved to my neighborhood a couple years before to be near her daughter.   In the time I knew Mary, we had become very close, often chatting on the phone or in person until the early hours of the morning about philosophy and metaphysical ideas.   At 92 she was as young and in love with learning as a kid.   For much of Mary's adult life, she and her husband had taken in young people from other countries who came to the U.S. to study.   These students lived with them for periods of time.   The images in the doorway over the sculpture's heart represent that domestic generosity.   (Click on the photo to enlarge it)

Each day when I came to visit Mary on her deathbed, I would tell her of the progress of this sculpture in her honor, and she would in turn tell me of the people that came to stand by her bed.   Mary knew that neither her daughter nor I saw these visitors, so she would fill us in on their activities.   One of them turned out to be my deceased husband, Neil, whom Mary had never met.

One night, after the sculpture was fired in the kiln, I brought it over to show Mary.   When her daughter and I held it aloft over her bed to see, the power failed and we were in semi-darkness.   We scrounged a number of candles from drawers and covered the bed table with lit votives so Mary could view "Mary's Contract".   She said, "It looks like my bed's in a church with a big white angel hovering overhead!"  Mary never saw the painted result, as she died within a week.   Perhaps the bird on her chest is her departure.
Posted by Elsbeth McLeod at 11:09 PM 2 comments: 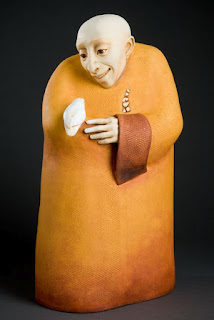 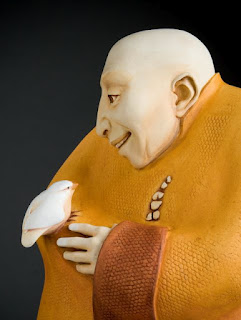 As per the previous posting, "The Painter", "Ascension" is one of the original sculptures of the Postulant Series.   He sold at Art On The Boulevard in 2009, and is one of the three largest pieces (about 25.5 inches tall), two of which I will post at a later date.   I so enjoyed the surprise on this guy's face at the luminous bird that had alighted on his sleeve, it's glow coloring his fingers and his eyes with it's light.   When I rolled out the slabs for the body of this sculpture, a little chunk of dried clay was accidentally crushed beneath the wet slab.   I didn't notice it until the next day, when I turned the slab over.   Instead of recycling the mass of clay to begin again, I incorporated the crumbles into his costume.   I highlighted them with painted shadows.   To me they look like a pathway, paving stones from his head to his heart.

The heavy woven cloth texture that was characteristic of the Postulants was accomplished with a large wooden rolling pin rolled over the clay, the wood surface meticulously hand-engraved in the negative woven pattern.   It took me two weeks, and I still didn't carve the entire length of the rolling pin!   I still have that in a drawer somewhere.   I wonder what my pie crust would look like with a nubbly woven texture.
Posted by Elsbeth McLeod at 11:49 PM No comments: