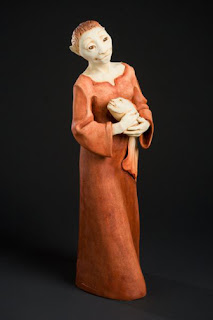 This ceramic clay sculpture is about 21 inches tall, and was sold to a retired professional couple who have been a wonderful influence on my outlook in life.   Metanoia II was inspired by a vision I had one day of a species of intelligent beings that had evolved from a more feline history.   My daughter had already drawn a picture of a woman that was based on some sort of supposed contact a friend had with another visiting species that was a more feline-appearing body.   Her picture is different than my sculpture, but I had a vision of this woman even before I saw my daughter's drawing.   And having cat companions I caroused with, it wasn't a far stretch to study my Siamese cat's head structure and elaborate on that.

My reasons for creating this piece had nothing to do with alien species, it was more symbolic of the different layers of ourselves.   Perhaps the feminine conscious and the subconscious.   After my previous husband's suicide, I sought therapy with a wonderful Jungian psychologist, who took me in hand and explored my rich and amazing dreams through the window of symbolism.   I could not afford to pay him his fee at that time, and it turned out he was in love with my sculptures, so we worked out a deal for two years.   It didn't take long for either of us to realize the exciting symbology inherent in the sculpting I did professionally but was unable to explain to others.   Perhaps it was not my job to do that, my therapist surmised.  Maybe I am the messenger, and others are the translators.   And so it has been for years since then.   I invite anyone who views these postings to try your hand at interpretation with commentary.   As I have found through conversations at gallery openings, there are so many out there who offer the last puzzle piece, and no one's offering is anything less than synchronous and appropriate.   Doesn't that fish look happy? 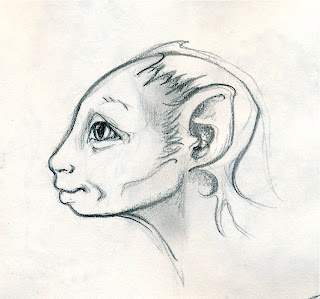 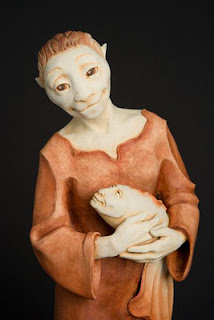 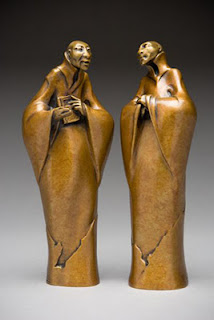 The title of this small bronze pair has always bothered me, as the names are reversed from the characters in the photo.   Knowledge is on the left and Wisdom is on the right.   They don't seem to mind, however.  They ignore my dilemma and continue their discourse through eternity.   These diminutive monks are only about seven inches tall, and, being solid bronze instead of hollow, weigh about 3.3 pounds each.   They fit nicely in the fist and are a must-have for women walking to their car from the office late night in a dark city parking garage.  Don't leave home without them.

I've often been surprised at what couples choose these sculptures for purchase.   Usually one member of the spouses or partners believes they are the one monk, and that their spouse/partner is the other.   My reason for creating them back in 1999 was to help me have a caricature representation of the difference between Wisdom and Knowledge.  You see how Knowledge grips his doctrine (or law or scripture) tightly to his chest, expounding it's virtues to Wisdom, who simply listens intently.
Posted by Elsbeth McLeod at 11:04 PM 5 comments: 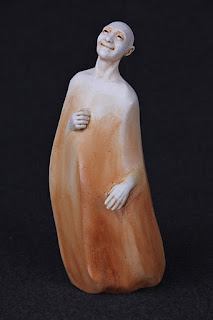 One day several months ago, I had a new line of sculptures I wanted to create for the upcoming September show at Art On The Boulevard in September.    It had been awhile since I'd sculpted clay, as the last couple years had mostly been devoted to learning to work with my line of jewelry.   The stoneware clay I'd used briefly the previous year was stiff and a little dry, so I began gradually hydrating and working it, coaxing it toward a pliable state I could use.   I needed Jim's help, as I am now older than  when I used to slam 25 pounds of clay on the table regularly.   Jim, being tall and muscular, lifted and pounded the clay on the heavy table over and over, nearly shaking the house off it's foundation (or so it seemed).   I sliced slabs off of the reconstituted block and worked them over and over to refine them.  Watching the chunk of clay elongate more with each rotation, and seeing the surface define itself in sensual facets, my excited Muse took the opportunity to fill in the visual blanks.   Using my heat gun, I stiffened the surface enough for the form to stand on it's own.  By the time I came back from lunch, it was ready for me to split the thing in half like a squash, ready to bake!   I hollowed the interior to within a half inch of the surface, then slipped the two halves back together.   At that point I could sculpt a head and shoulders to blend naturally into the rhythm already naturally created by the facets.   And of course, as often happens, he brought his own name.  David.   He seemed as though he'd found that which few of us achieve in life..... David found his soul.   His bliss extending and blurring the physical boundaries.

David Finds His Soul was the first of the series I've blogged on this site up until this point.   An organized and intelligent creature would list him first, I suppose, but I follow a natural order of creativity that knows it's own flow, and I don't question it too much with my mind, as I would truly screw it up.
Posted by Elsbeth McLeod at 1:08 PM 2 comments:

Music of the Spheres 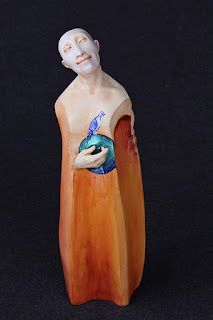 The bird perched on the sphere painted on this man's chest is a Mourning Dove.   Since I was a little girl riding my backyard swing in the dry Denver evening air, the quiet song of the Mourning Dove has been like notes from a Divine source.   Here in Western Washington those birds are less populated than in Colorado (or maybe there are generally less birds than in the 1950s), so when I hear one in the distance, my ears strain hungrily to pick its notes from the cool evening breeze.  I came back to the studio to begin this sculpture after such an evening.

Originally I had applied copper leaf to the sphere, a time-consuming and difficult task.  The next day the copper leaf came off easily on my fingers... the adhesive had acted as a solvent for the underlying enamel.  When all was cleaned up and dried, I used Interference acrylics to create a green iridescence that picked up the light nicely.  The sad part was that the copper leaf had actually reflected "Music's" hand.  It was stunning.  But I like this nearly as well.
Posted by Elsbeth McLeod at 11:28 PM No comments: