Today there is no visual posting other than the text.   I hope that will suffice in the interim, as this was a day that wine in a terra cotta cup thrown in a perfect cylinder by a Quaker friend brought inspiration to me.  That and a visit by two miraculous women I didn't know before today.

This is a journaling of priorities.   Something that in this time of our culture usually involves little more than what brings money to us.   However, we can starve physically and die happy in a resolve of appropriateness.   Perhaps in these times, what we need to refocus on is what our deepest priorities are.   Let me give an example from my own history, a story of a man I didn't think much of at the time, but who ended up having a huge impact on my worldview in later years:

My first husband, Bob, and I moved to the Pacific Northwest in the late 1970s, after Bob had been honorably discharged from the Navy.  We found ourselves renting a small cottage on 14 acres in Federal Way, Washington, on the edge of Lake Geneva.   This was acreage that had been a resort in the late 1930s, and had a few of the buildings left of that era in various states of disrepair.   The forest was ancient between the buildings, the sun on the lake dominated the light and the atmosphere.   It was a fairy land between the growing town of Federal Way and Auburn.   The houses on the property were dilapidated, and subject to sudden invasions of large mushrooms and giant slugs you could hear sliding across your bathroom walls in the middle of the night.   The human inhabitants of the property were equally unique.  But the only other neighbor I want to focus on today is the man who referred to himself as "Dallas".

Dallas was a quiet man.  He had long blond hair, drove a Volkswagen "Thing", and had a Doberman Pinscher named Cher.   She was a delicate dog, diminutive for a Doberman, and gentle.  But what I remember the most of our light friendship with Dallas, was his living conditions.   He had taken up residence in the old garage of the resort property, and, as the hands-off landlord allowed with no questions asked, he had remade that building into a very intriguing living space.   Very spartan, concrete floor.   Stark white walls.   However, the ceiling was punctuated with numerous skylights, each bathed a unique sculpture beneath it with hard daylight.   There was little of furnishing, Dallas had invested almost nothing in comfort other than a soft place to plop down as you focused on the islands of sculptural interest throughout the residential gallery that he lived in.   He existed for the sculpture he had spent the majority of his income on.

Dallas's quiet, uncluttered lifestyle honed my worldview of priorities.   Looking at Jim's and my current house, one would wonder how Dallas's life influenced our living space, but we are also unique individuals with our own priorities.  I see in my present day life definite traces of Dallas's influence braided with my own, however.   Those islands of sculpture and visual art Jim and I have nurtured are to us like the cat's eye band of light that moves and glows on the surface of a gemstone, like a Tiger Eye.   Ever in transit, but always the highlight over our background life of normalcy.   Our colorful living foundation basks in the opulent glow of the chatoyance of art.
Posted by Elsbeth McLeod at 5:06 PM 2 comments: 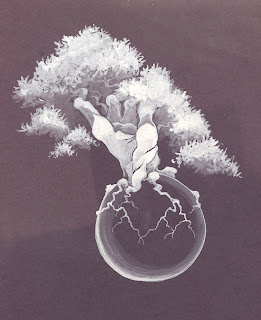 This is another drawing from 1983 (mostly 'cause I'm too busy to sketch right now).  Unfortunately, the black paper I scrounged at the time was not very good, and it was accidentally left near a window, where the daylight faded it in places.   I really love this painting (with the marvelous white opaque Dr.  Ph. Martin's ink... still can't find that version, maybe it contained lead), and hope I can figure a way to doctor it back to health.   Perhaps I can recreate it with paints.
Posted by Elsbeth McLeod at 6:40 PM 6 comments: 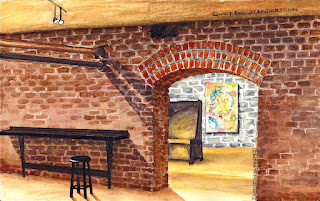 Last Friday my sister and I took a rare and special day together, just us two, as she is retiring to Idaho (I know, kinda backwards, isn't it?) from Sequim, at the end of June.   She's lived here for more than a decade, and it's been great to have her in the same town, even if we were unable to get together very often during that time.  On Friday we played at Akamai, my favorite art supply store in Port Townsend, where we probably spent way too much money.   The weight of our supplies eventually sucked us below street level, where we took refuge at Undertown to slurp a gluten-free beer and sketch.

I will so miss her.
Posted by Elsbeth McLeod at 6:17 PM 4 comments: 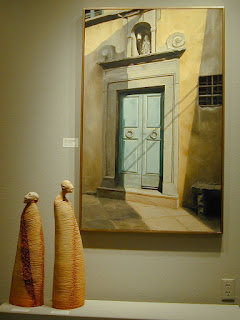 This is a photo taken during a show for my work and that of painter Rene Flynn-Federspiel at Gaskill-Olson Gallery in 2002.   The gallery is now closed, but was a vibrant and much loved art hub for the community.  That building in Langley, Whidbey Island, Washington, now houses Brackenwood Gallery.   The show for Rene's and my work was a success, and I sold both the sculptures depicted here, as well as several others.  The one on the left, "Hums His Tune", sold the night of the reception, and the one on the right, "Clifftop Innocent", sold some days later.  I so loved the way the gallery staff positioned my pieces with Rene's fabulous paintings of Italian street scenes.

Posted by Elsbeth McLeod at 10:18 PM No comments: 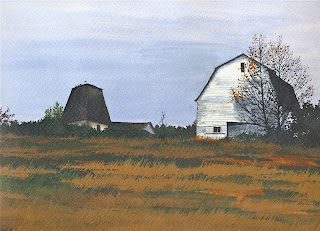 Before I get back to my masa paper workshop paintings again, I thought I'd post an old watercolor painting I'd done in 1982, when I lived near Puyallup, Washington.   The valley was rich with old historic architecture still standing from the era in the mid-1800s, when the hops crop was burgeoning and creating wealth and commerce to the Puyallup and Sumner area, before the hops lice infestation ended those golden times from California to British Columbia.   I'm not sure if this barn is a hops barn, as it doesn't have the characteristic cupolas at either end, but it certainly seemed historic.   At the time of this painting, I used watercolors dry, right out of the tubes, much like the oil painting I'd done from 1963 until 1983.   I guess gouache would work very well for me at this point, as I like that style of watercolor.   Opaque and dry-ish.

Anyway, I received my shipment of masa paper, sumi ink and wheat paste today, so we'll see what comes of playing with those toys!
Posted by Elsbeth McLeod at 6:34 PM 2 comments: 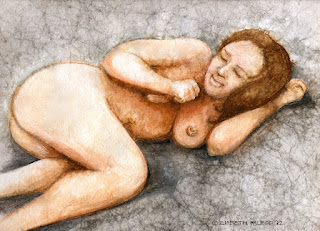 Last week I took a workshop in Port Townsend at the Northwinds Art Gallery, taught by Sheila Sondik.   A couple friends took the workshop also (see Marian Morris's results).  The technique used Masa printing paper that we soaked and crinkled, then using sumi ink, worked the values of our subject into the surface of the wet paper.   We all enjoyed it very much, and it was fun watching the varied results of the other students during the two days we participated.   A few of us brought watercolors and colored inks, also.

In my usual unorganized-right brain way, I am posting the last of my three masa paper workshop paintings first.   No, we didn't have a nude model to work from, I just made it up as I went along.   I'd brought photos my husband had once taken in Scotland to paint architectural subjects for the first two paintings, and I will post those later.   Being a more figurative and portrait-oriented artist, I just HAD to try a human form with this technique!   I think it worked out okay, though without having glued the paper down to a backing (as we were taught to in class) it's difficult working the details on the crinkled paper.   I DID take an iron to it, though!

*A note on June 7th.....   The wheat paste arrived, I pasted down the paper on heavier watercolor backing, and did more work on the nude with gouache.   I'm liking it much better!
Posted by Elsbeth McLeod at 12:10 PM 4 comments: