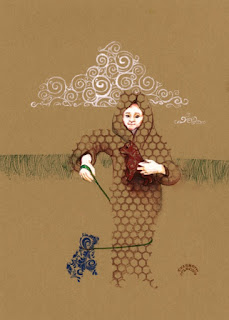 It's been a relief to read from many of the Facebook artist friends I have around the world that my Mystery Of The Missing Muse symptoms aren't unique. It's been painful to be in the studio when she's not there. I settle into the normal routine. The paints, pencils and pens surround me, my favorite Gregorian chants on the CD player, a cup of tea at the ready standby (but not too close to the paint water jar). Birds attacking the bird feeder outside my window like it was the last day before a nuclear winter. All those perfect conditions. After an hour of shuffling collage papers and organizing my paints....crickets. Not a whisper from the Muse. Paper looks like paper. Watercolors look like stuff in tubes. Or a mess on a palette. No magic.

My dear friend Linda and I have been in long conversations regarding Muse Traps, recently. What to do to tempt the Muse into getting involved again. We've pretty much agreed Ms. "M" doesn't like formality much. She's a sucker for play and novelty. She is a kid in her essence, and quite seductive.  This is why she is so often found in the company of children. I remember that. As scary as my mom or the elementary school principal was, their authority was outranked by the whisperings of the Muse.

What would a kid do in my studio shoes? I brought down the metal lunch pail I keep my stamping sheets and pads in from the supply shelf. I found recently that these intricately patterned rubber sheets meant for impressing Precious Metal Clay jewelry (you can find them on www.cooltools.us, they have small and larger ones) were perfect for stamping ink. And they are wide enough for some serious (oops, sorry, Ms. M) playful applications. And if I take a sheet of paper towel and carefully tear an opening out of the middle and use as a template to stamp through onto my sketchpad or watercolor paper, I can do multiple images that afterward lend themselves to all kinds of fun and embellishment.

Ms. M is leaning against the door frame of the studio, pretending she's not stealing glances at my stamping fun.
Posted by Elsbeth McLeod at 12:44 PM 4 comments: 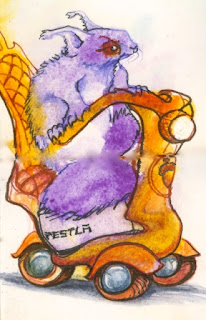 This morning my husband and I watched out the kitchen window, bemused, while a small squirrel wore itself to a frazzle, defending the hanging new birdfeeder from hungry birds, who flocked from all zones of the frozen forest to restore the calories their little bodies had used up getting through the night. Squirrel can’t even stop and enjoy the seed, as there are so many others who are waiting to take it from him. His poor little brain is scorched from the worry and vigilance and anger. Because Squirrel had become bolder in recent months in asking us to donate to its well-being, to the point it was nearly underfoot as we walked up and down our porch stairs (we did little to encourage this behavior), the squirrel regarded anything we offered Nature as it’s own personal stash. An intelligent and self-serving little bugger, Squirrel had a longer range plan in mind for it’s getting through the cold months. Most seed it gathered was put into the ground as soon as possible. The various branches of The First Savings Bank of Mulch.  This is a tactic that has served squirrels quite well for millennia, I am sure. And not being tribal creatures by nature, their nature is to take care of themselves. Period. Sharing the wealth is not an option. Their future is not the wellbeing of community, their future is stored seed at a time when there is no food, and snow and ice cover everything.

And so Squirrel has no alternative, with this artificially-provided container of seed, than to chase off all the other creatures that want to share from it also. For Squirrel, this container of seed is likely all that will be, ever. Squirrel can’t remember that somehow, there was always a fresh container of food that magically appeared. Every day. Squirrel can't even reflect on the forest being heavy with fir cones, full of seeds. Faced with accumulated wealth, Squirrel is also faced with the fear it can be taken away.

Squirrel is not evolved enough to have a Faith.


Posted by Elsbeth McLeod at 5:57 PM No comments: