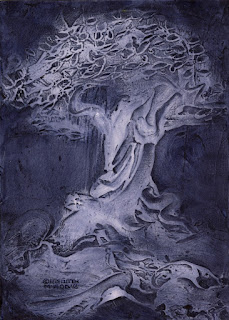 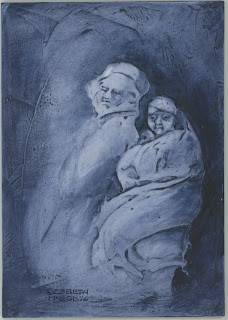 Despite the ongoing racket and activity of Jim's and my roof being torn off and rebuilt by our handyman and roofing crew this last several days, I still creep along at a steady pace with my painting, whenever I can sneak down to the studio. Often this happens from 6 o'clock until 8:30 or 9PM. Jim and I installed some new lighting in the studio, so now I can see with breathtaking clarity the details and colors of my work! And the mistakes!! Yow.

The Golden Modeling Paste I used on the series of Cuneiform and Cave Painting pieces that now hang at Olympic Cellars Winery, I've started using sculpturally. I mean, painting the paste on with palette knifes to create more than just textures. Certainly a good marriage of my old and my new career skills!

The above paintings are titled, "Blue Laurel" and "Nomadic Couple". The faces of "Nomadic Couple" weren't exactly easy to whip out with the palette knife, so dental tools were employed to carve and refine their delicate features.

I love how the initial image on the board flows out like a dream image. And as I've said previously, it's safer to not judge it, and try to "fix" it. Afterward, sometimes after several days, the painting strikes me with a message. Maybe a metaphor that has meaning to me.  And sometimes the meaning eludes me, as it's perhaps intended for someone else.  These works, like my sculptures, are alive. They find their own way through the world, bring something to someone else. Like R2D2.