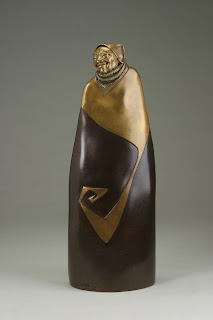 One day in about 2001, I'd been cleaning up the studio after a day of sculpting.    There were scraps of stoneware on my table I picked up and pounded into a ball.   I thought I'd have a little fun and played with an elfin face, enjoying the freedom that comes when there's no pressure to create for the public.   This one would hit the scrap can in a few minutes before I would close up for dinner.   The clay betrayed me and became the most charming old woman in no time.   I rolled some more clay on heavy canvas, creating a kerchief for her head.   This was one of those moments when the sculpture begins to practically create itself, dragging me along!   I wrapped the head in plastic and left it for the night.

The next morning, she looked at me so lovingly from my hand, I couldn't help hollowing her out, smoothing the details and beginning a streamlined body form that harmonized with the spontaneity of her expression.   Wanting a form that seemed more a shadow silhouette distorted on a wall than a 3D human outline, I sketched several small shapes before the right one appeared.   I enlarged it with a grid to cut out a template for the body slabs.   Once the soft clay slabs were cut, a series of old towels and foam indentations held them while an elephant ear sponge stroked and coaxed the clay into it's curves.  Once stiffened with a hair dryer, the edges were seamed together with clay coils and slip, a stiff rubber rib compacting the problem areas smooth.  At that time, I was still playing with Dragon Ribbons carved on the surface of some of my forms, and this one gave this female a sense of motion without elaborate costume folds.   A suggestion of dance.

Once her head was positioned, she told me her name was MaryAnn.  I didn't ask why.   Before long, the foundry had cast a beautiful bronze duplicate, and my patina artist, Adam Fah, evolved the perfect patina to showcase her attitude.   She became one of my top three bestsellers.   Many women exclaimed I had recreated their mother.   I assumed that was a compliment, as they were purchasing her for too much money to want to throw darts at.

Art On The Boulevard in Vancouver, WA, has a MaryAnn on display.   If you are in the Portland area, go by and check her out.   She's one hot Mama!
Posted by Elsbeth McLeod at 9:31 PM 2 comments: 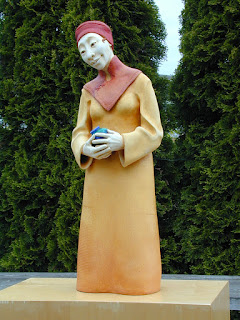 Sorry about the amateurish photography, I had shot this myself on my back deck after Waterbearer was finished being painted.   Still, the sun was muted by clouds, and she came out well enough.   This sculpture, made of off-white stoneware clay, is about 21" tall.   She holds in her hands a water jug that is painted to look like the earth.   I used some of the last of the clay (this sculpture was created in 2004, I think) that for years had worked so well for me, and accepted the oil paint washes very nicely into the surface.   Within a year the same clay from my source in Tacoma had changed, and was very difficult to use.   Thus the recent experimentation with the low-fire white stoneware, used to create the small, acrylic painted sculptures in the first several postings of this blog site.   Waterbearer sold at Trios Gallery in Solana Beach, CA., several months later.
Posted by Elsbeth McLeod at 12:09 AM 6 comments:

The Major "Innocents III and IV" 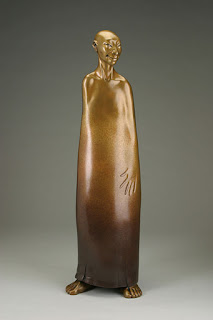 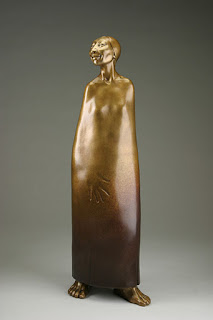 At one point, not long after I had begun casting bronze in 1999, I created a pair of small, stylized people, I called the "Innocents".  First I made the male, and thinking I was creating a buddy, I began on the second one.  He seemed shorter, though I weighed the clay carefully.  As I progressed, "he" pretty much looked much more like a "she", and the first Innocent was grinning down at her with much pleasure.   They were only about 10" or 11" tall, "Innocent I and Innocent II".   It was a pleasure to see them cast in bronze, and I sold quite a number of the edition easily.   And in my strange, upside-down way, I have not posted those sculptures first.   These pieces are actually an enlargement of that Innocent male and female, sculpted and cast in 2004, I think (I'll have to check my records).   They are about 34" tall, and weigh about 65 lbs each.   Now that's a little too big to carry in my purse on a cold night in the city!
Posted by Elsbeth McLeod at 12:24 AM 1 comment: 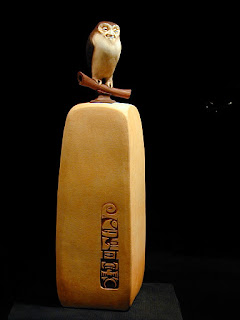 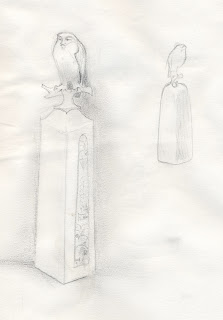 Back when I sculpted "Whetherbird", the clay original, he was the younger (and littler) brother of "Guidance".   I was in love with the idea of milestones, or even monuments, that observed and informed passers-by.   The "hieroglyphs" came spontaneously out of my head.   I have no idea what they say, but they looked important and meaningful.  The "wood" perch that the owl sits upon is painted clay.   The whole affair is perhaps 29-30" tall and maybe 8" across the base.  The sketch is my initial ideas for the eventual sculpture.

When my husband died, there were two close friends who were truly superhuman in their dedication to getting me back on my feet, financially and emotionally.   They helped me avoid bankruptcy with skillful consolidation of debt payments, and did most of the dirty work of helping me price and sell tons of "stuff", and would not accept compensation for their efforts.   I gave them "Guidance", as they are bird lovers and art lovers.   As eventually happens with all of my work, "Guidance" found his appropriate home.
Posted by Elsbeth McLeod at 7:08 PM 8 comments: 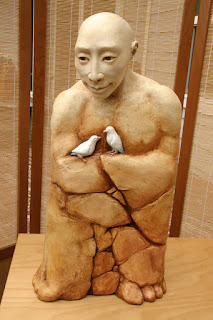 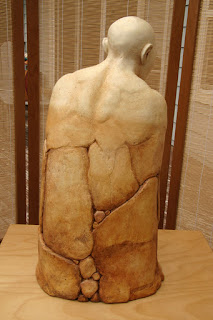 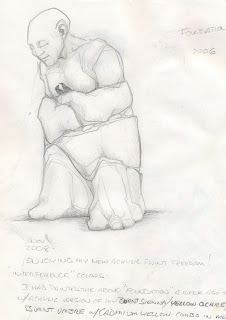 This gentleman is about 21" tall and sold at Art On The Boulevard more than a year ago.   He was years in the making... three years, roughly.   I had finished sculpting him and fired him in the kiln in 2006, but finished painting him, I think, in 2009.   When I began sculpting "Foundation", I needed a resource for well-developed male shoulder and back muscles, so I went to a drug store and raided the muscle-man, body-builder magazine section, leaving the store hoping no one I knew would see me (it's a small town and I was a widow lady... I'd never live it down!).   I tore bits and pieces of the photos of rippling, glistening shoulders and biceps and arranged them on my counter top in the corner of the studio, referencing them often while working the clay.  One day my sort-of-boyfriend Jim came by to see what I was doing, and noticed the magazine clips.   "Is this your beefcake corner?" he asked....  every inch of me blushed beet-red.   We still laugh about that.

"Foundation" isn't the first sculpture I've done that explores a stone/human metamorphosis.    There was a piece, tall and narrow, titled "Clifftop Innocent", that sold in 2002, and of course, my first blog photo, "Bones of the Earth".
Posted by Elsbeth McLeod at 11:57 PM 1 comment:

This is one of my silver pendants, and maybe one of the first
pieces I'd created after learning how to do the silver clay in 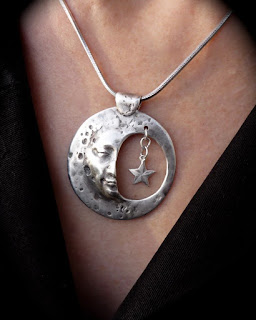 2009.   The moon surface texture was carved in plaster during the course of a couple hours.  Once completed, I made a silicone rubber mold of it, so the silver could be impressed into it.   The face was made from a mold I'd already carved before in a little block of plaster, then blended with the silver crescent moon I'd domed and carved out.   It was harder than I make it sound!   Waiting for the kiln to peak at the temperature that sinters the silver particles into a solid was only an hour, but felt like an eternity.  I opened the volcanic interior and removed the orange, glowing silver piece and plunged it into cold water.   "CHEEEEEWWW!", it steamed, and scared the cat.   Very dramatic, and very rewarding.   After the scrubbing, patination, and polishing, I had the most exciting piece of jewelry I'd ever seen!  I wonder what it would look like with a dangling star sapphire in place of the silver star?
Posted by Elsbeth McLeod at 6:04 PM 4 comments: