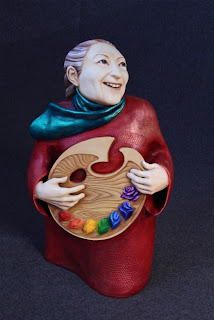 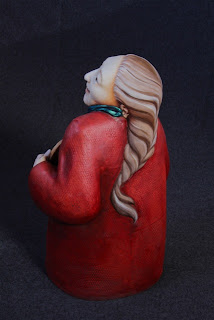 It seems that I've gotten carried away with posting my sketches lately, so I thought I'd mix in a little variety.

When Jim and I met, mutual friends brought him over to my house in May of 2006 to view a body of ceramic sculptures I'd finished, and was preparing to ship off to a gallery in San Diego.   It was the Postulant series, with very wide, stubby bodies.   Each Postulant represented a passion that figure had with what they brought to the world.  For instance, "Pharmacognosy" held an open book of herbal medicine in his hands, with vines and plants growing from the pages.  "The Dancer" was doing just that in her endearing little way.  However, there was one I didn't have time to begin work on, "The Painter".    As Jim and I got to know each other better, he commissioned me to do a Postulant that more or less represented his recently deceased wife, Suzanne.   She was a passionate painter.   I hadn't spoken to him of the one sculpture that I didn't have the timeframe to create!   Life's synchronicities  continue to amaze me.   Though I had been a professional portrait painter many years ago, I had never actually done a portrait in clay, especially of someone whom I'd never met.   It was an emotional process, knowing what was at stake.   She was finished, dried, and fired by the end of 2006, but the Painter was finally painted January 2011, in time for the fifth anniversary of Suzanne's death.   Jim invited friends and community who had known Suzanne, for a reception.    One of the more gratifying moments of my life as an artist.   Fittingly, these photographs were taken by Jim.

A foot note:  Jim more than paid off the price of "The Painter" by taking me to Italy for three weeks, September 2006!  And sadly, there were a few of the Postulants that I didn't have time to photograph before they sold (Dancer and Pharmacognosy included), but I do have photos of some I can include in later postings.
Posted by Elsbeth McLeod at 2:18 PM 2 comments: 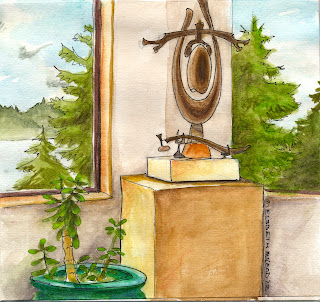 This sketch was a three-week endeavor.   A friend gave me this little sketchbook for Christmas, and about three weeks ago I used my Staedtler outliner pen to draw the pedestal and sculpture standing nearby in the living room, as Jim and I enjoyed tea.   Up until today, the weather had not been co-operative enough to finish the sketch the way I wanted.   Now I understand how much patience it takes, sometimes, for a photographer to get the perfect shot!   The bay outside the window was even clear and almost blue, not fogbound.   The paint was Winsor Newton watercolors.   The sculptural bell on the pedestal is a Steve Reinmuth bronze.
Posted by Elsbeth McLeod at 11:11 PM 3 comments: 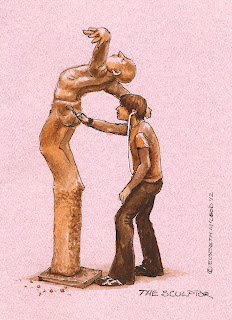 This is shameless drawing from a magazine photo of a famous sculptor.   I'd found some nice, toned, acid-free cardstock in Jim's attic boxes that he and his now deceased wife had reserved once for their photography.   I've acquired a small Winsor-Newton travel watercolor kit and wanted to try it out on something, so this is a test.   I think I passed the test.
Posted by Elsbeth McLeod at 10:11 PM 2 comments: 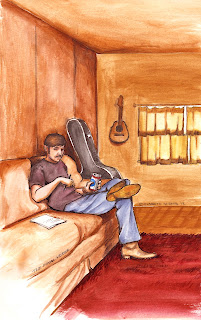 Another dig through the old photo box turned up a little Polaroid shot of a friend in the apartment my first husband and I rented in Norfolk, VA.   Lee and my husband, Bob, were close friends and were stationed together on the same ship in the Navy.   The guitar case and a little mandolin on the wall in the 1977 photo inspired a new story in my mind.  The figure became a country musician, finishing a song he would record on his first album.   I used the photo as a starting point and went from there.   I had at first thought to sketch the entire thing in monochromatic sepia tones, but a red shag rug cried out to be a major player.
Posted by Elsbeth McLeod at 7:19 PM 1 comment: 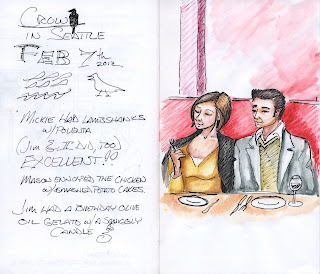 As if we hadn't celebrated Jim's birthday enough this last week, he and I drove to the Bainbridge Island Ferry Tuesday and walked on, to be picked up on the bustling Seattle waterfront by our daughter, Mickie, and her friend Mason.   That evening she bravely negotiated maddening detours and traffic snarls to bring us to Crow, her favorite restaurant.    As we waited for our fabulous meal of lambshanks on polenta, I sketched Mickie and Mason.   I know it looks like she is studying her fork for possible food particle residue or lipstick, but she was actually gesticulating with it.   As strange as it sounds, the Olive Oil Gelato was wonderful!   It was a great day.   The kind of birthday celebration that makes one feel like a young pup, not an old fart.
Posted by Elsbeth McLeod at 3:57 PM 2 comments: 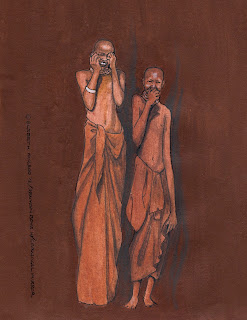 There is nothing more compelling than a human face contorted in emotion.   It tugs at the muscles of one's own face, and draws one into empathetic attunement with the subject.   Laughter begets laughter, sorrow evokes sympathy.

This sketch was inspired by a photograph shot in 1987 by Elisabeth Sunday.   I had purchased the greeting card it was printed on in about 1996, along with several others that had images of hers.   It was titled, "Laughing", and was the reflection of two boys from the Nototo Mountains in northern Kenya, observing their own images in a distorted mirror Elisabeth had brought with her.   I found that card again recently, cleaned the dust off and played with the subject matter on paper with my Derwent Inktense pencils and acrylic paints.   The painted background has a slight copper metallic sheen to it.
Posted by Elsbeth McLeod at 12:05 AM 4 comments: