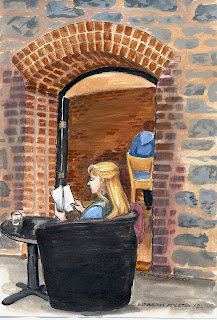 This is the other sketch from Thursday's group sketch at the Undertown.   I thought I'd ruined it yesterday with overworking, but then..... the magic flowed through the pen and the brush, (which don't always play together nicely).... and there you have it.   We had bumped into a friend at the Co-op after leaving the Undertown, and she spoke of her Haiku writing class going on just across from where we were beneath the street.   I envisioned this woman I drew as reading Haiku beneath the city. 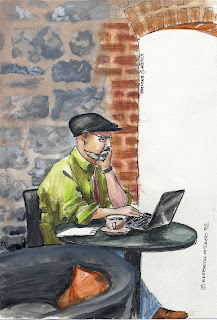 Our little sketching group gathered together yesterday at The Undertown in Port Townsend, where we collectively sipped Cappucinos and Chais and drew the locals as they quietly sipped, read, and chatted.   Marian and Roger have already posted their sketches on their blogs this morning.   I got blogged down with bricks and stone.   This gentleman was not only oblivious to my interest in him as a subject, but also to the faces that seemed to emerge behind him.
Posted by Elsbeth McLeod at 7:13 PM 4 comments:

Mattie On The Ferry 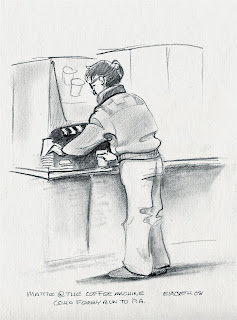 This is a sketch I did on the CoHo Ferry a few years ago, I don't remember what the nature of our trip was.   I was thinking originally when I opened this sketchbook up yesterday that it was the trip Jim and a friend and I took to Victoria, Canada, to purchase silk yardage for my wedding dress, but we hadn't taken the CoHo that day.   At any rate, this woman had gone through her coffee preparation with the purposeful and dedicated deliberation of a priest, laying out the communion wine.   Which gave me plenty of time to sketch her.   I just pulled "Mattie" out of the air, not really knowing her name.
Posted by Elsbeth McLeod at 6:03 PM 2 comments:

Nap At The Plate 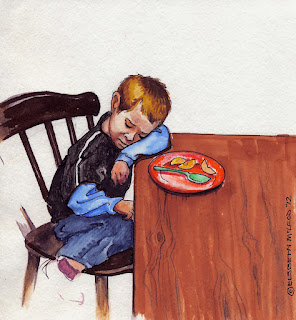 As I'm not on Facebook, my daughter caught me up today with photos and little stories all her Facebook friends usually get to enjoy about her funny mothering episodes.   She sent some of them to me via email. There was a photo of our little grandson, Evyn, sound asleep... literally mid-bite... at lunch.   He'd had a bout with insomnia that morning and it caught up with him after kindergarten, during his apple course.  I was unable to detect in the photo the long, silver line of drool she said hung from his mouth, but it's just as well, I guess.   I did this sketch of him this evening, based on that photo.   It's a proud Grandma who can find a photo of a drooling kid precious beyond belief.
Posted by Elsbeth McLeod at 7:42 PM No comments: 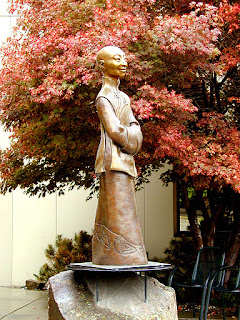 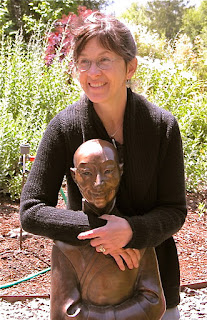 About nine years ago, a dear friend and fellow sculptor, Jeff Oens, invited me to stay with him and his partner for awhile in their loft studio above the foundry we had our bronze sculptures cast at.   During the days I enjoyed Jeff and David's hospitality, Jeff and I both progressed on pieces that were roughly the same size.   Mine was this gentle monk I called "His Gift", his was an expressive gargoyle on a pillar.   After some weeks of applying oil-based clay to the surface of the wire and foam armatures, Jeff and I both finished our pieces and signed them on the same evening, amidst much partying and cheering from fellow sculptors and foundry folk.   In the following weeks they each worked their way through the different departments of the foundry as they became bronze.

"His Gift" spent a couple years on loan to Art On The Avenues, perched on a basalt pedestal in public, outside of the Oncology Department at the Wenatchee Valley Medical Center in Wenatchee (top photo).   He now resides at the entrance to our garden, welcoming visitors. 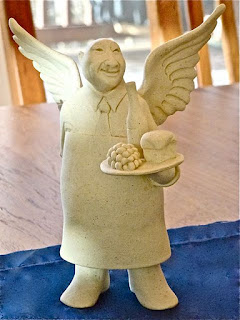 Once upon a time... about twelve years ago, there was a little project that Neil and I had fun with for awhile.   I would create little clay figures and he would photograph them for publishing as greeting cards. They would act out different roles with little stage settings we'd go to great lengths to create.   It seemed like a fun idea, and in fact we were quite involved with it daily before Neil passed on.   This little angelic waiter had been photographed for our 2001 Christmas cards, which were all very well received.   Folks whom we'd sent them to saved them and sometimes framed them.   The interior of the card read:


That was the last card we made.    He continues to charm Jim's and my home today, and Jim has renamed him "Marcel".    It seems to suit him very well.   This is Jim's photograph of Marcel.
Posted by Elsbeth McLeod at 1:07 PM No comments: 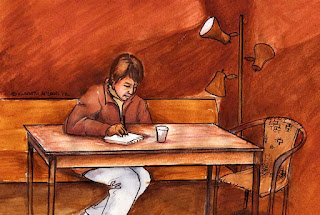 My last sketch at the Buzz.   Chai in the cup, not coffee.   Marian is sketching Roger, and Roger had sketched me just before.
Posted by Elsbeth McLeod at 7:15 PM 2 comments:

My First Sketch of The Artists Who Stare At Things 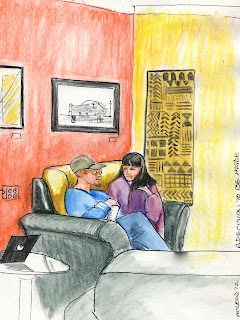 This couple were deep in a sincere discussion at our local coffee shop, The Buzz, yesterday.   Three of us had gathered together in an informal Sketch Crawl, and the Buzz is "a-buzz" with interesting and unique people as well as objects.   Not to mention the artist's show-of-the-month on the walls.  Now fellow-bloggers (and Sketchers as well as Photographers and Painters) Roger and Marian have taught me how to do a hyper-link on my blog, so I can link their blogsites.   They are responsible for my return to sketching and illustration, through their interest in the Seattle Urban Sketchers .   And as they are Friends on my blog, you can go to their latest postings.  Marian thought we should call ourselves "Artists Who Stare At Things".
Posted by Elsbeth McLeod at 11:47 AM 2 comments: 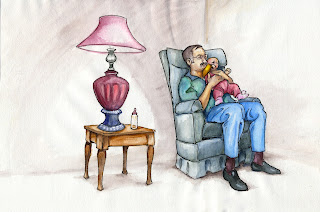 It always seems to me that coming into the New Year somehow brings along a few tattered bits of things I should've finished with in the Old Year.   Sometimes it's something I wish I'd said to someone.  For example, I wish maybe I'd broken my mother's ten year silence between us before she died last July.   Or maybe it's something I could've forgiven myself for, or someone else for.   Sometimes a tattered little bit of unfinished business can haunt me through decades of New Years.  One in particular I've managed to ignore for 35 years.

I was digging through a box of old photographs a couple days ago, and found a small, faded picture of my father at 53, holding my baby daughter on his tummy.   It was the only time he had with her, ever, and the look of bliss on his face at the time the shot was taken was totally missed by me until I found that photo again this week.   He died three years later of a brain tumor.

I took out my Inktense pencils and sketched that moment in time before the photo degrades any further.   That tattered bit of thing that I didn't know I was dragging with me through those decades was to acknowledge and honor the loving imprint that dear man had left on the lives of my family.... even those who can't remember him.  The sketch was that acknowledgement for me.
Posted by Elsbeth McLeod at 8:58 PM 4 comments: