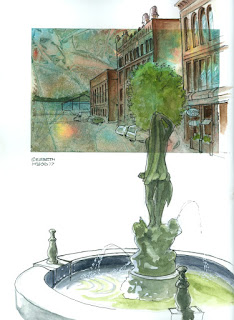 Recently an inspired group of Urban Sketchers descended on downtown Port Townsend, Washington, and spread out to capture their unique view of the town. I marched a couple blocks over to sit just above and behind the Haller fountain, otherwise known as Galatea. Not only was her little bronze tush worthy of rendering on my sketchpad, but I needed to utilize a page with a prior blocked-in square I had pre-textured with diluted acrylic inks and Cling Wrap, a week earlier. This method has been really fun to do, with sketching over the "texture" later.  (See April 28th's "Papaya Woman")

It turned out the way I'd randomly placed the texture was a perfect mystical framework for the view Galatea watched, eternally. As though she could maybe leap into that window and make her way back to the Strait of Juan de Fuca at the edge of town.

Posted by Elsbeth McLeod at 6:10 PM