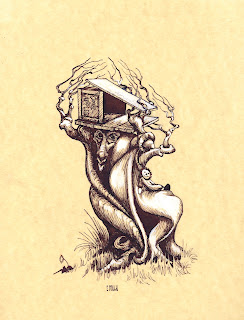 It's amazing how the scent of a flower or the sound of a certain song will bring a flood of memories.  Equally so for me are drawings I have done in years past when they are pulled out of an old box or file.  This is another sepia ink drawing I had done in the early 1980s on parchment.   At the time I was drawing these tree-related pieces (around age 30), I was connecting deeply with my childhood spent primarily in the limbs of trees.  As I count down the months before my sixtieth birthday, childhood seems to me more of an abstract concept, other than what I vicariously sift from my grandchildren.  However, finding these drawings almost begins for me a relay connection with the essence of that little girl I was, through the pen strokes of the thirty-year-old.   We link hands across the decades and flash that sweetness of being, unbroken by time.   Perhaps I can do the same for the woman I will be thirty years in the future.

A note added later:   Someone pointed out to me since I posted this that the tree depicted here seemed a little scary, and the abandoned rag doll completed the image that was rather Stephen King-ish.   I was astonished!   I guess it all depends on what sort of Disney-esque (or King-esque) upbringing the viewer had.   Craggy trees (like craggy people) spell "evil" for many in our U.S. culture brought up with Hollywood entertainment.   It probably explains why we treat our elderly so badly, and mow down our ancient trees.  As a child, I was very close to nature, and to me a twisted, ancient tree indicated a comforting knowledge.   A being who had come through countless environmental ravages and seasons and endured with it's spirit intact and... much the wiser for it.  Hopefully the same for Human Beings as they weather life's seasons.   This gnarled tree is using it's entire strength to cradle and support the child's self-built refuge, as it has learned to guard and cherish what is sacred in this world.   I also loved the contrasting images!
Posted by Elsbeth McLeod at 9:38 PM