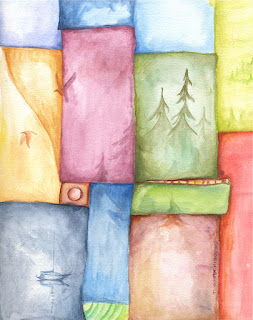 This painting was mostly an exercise, playing with combinations of my Inktense pencils in colored swatches (oops, you can tell I once knitted, long ago).   Once on the watercolor paper, I thought it would be fun to make the squares a multi-colored lens through which one could view the scenes I love so much on the Olympic Peninsula.

Yesterday Jim and I took the ferry over to Whidbey Island to meet a friend who has a foundry, and who'd met us there to return a couple of my bronze sculpture molds to us.   While on the island, I treated Jim to a wonderful rooftop lunch in Langley, as I'd made a couple of bronze sales recently.   The ferry we took over from Port Townsend had slowed midway across the water, and sounded it's fog horn numerous times.... we were caught in a patch of fog which cleared by the time we docked on Whidbey.   We learned later that fog had eliminated three of the ferry runs that day, and the reservation we had to go back home at 6 PM stretched to 7:30 PM, as they needed to play catch-up with all the backed up traffic before nightfall.  Oh, well, it was certainly magical countryside in which to pass the time as we waited.   And after all, once on Whidbey Island, you're on island time, so anything can happen!

Posted by Elsbeth McLeod at 6:48 PM